Welcome to Binge Central’s first ever (!) roundtable discussion. This time, we’re sinking our teeth into Sunday’s “True Blood” (get it? because vampires have fangs…no? OK). Yes, believe it or not, people still watch “True Blood” (we think that’s necessary to point out). It’s on the home stretch, and it’s finally beginning to show some signs of life (get it? because vampires are dead…we’re done now). Let’s jump right in:

David: The highlight of the episode by far, it turns out Ginger was a vampire-obsessed student at Tulane when Pam and Eric hired her at the pre-Fangtasia video store (yes – it was a video store that had its best business in porn). She’s a brunette (and later blonde with streaks) who can’t take her eyes off Eric – he exudes sex for her, and hasn’t even glamoured her. Well, that happens later, after Ginger suggests to Pam some years later they change the video store into a hip vampire bar called Fangtasia, now that vampires have come out of the coffin. Pam glamours Ginger and steals the idea (completely in character: A+). 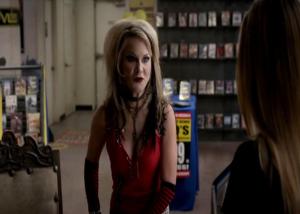 Josh: Who knew Ginger is basically the reason most of season one happened? At that point, the action was centered around Fangtasia. Everything from Jason’s V addiction and fling with Amy to Eric locking Lafayette in his dungeon happened at that ex-video store. Grungy college Ginger is the best kind of Ginger. If Eric had met her before that French chick, it wouldn’t have even been a contest. Maybe one day he’ll throw her a bone, literally.

David: I doubt that – the French chick > ginger, in my humble opinion. But maybe we’ll get a flashback of Eric and Ginger together and Pam being jealous?

Josh: One can only hope. The French chick was hot, but Ginger had vision. Leave it to this stupid show to turn one of its most minor characters into something entirely new and so much better. 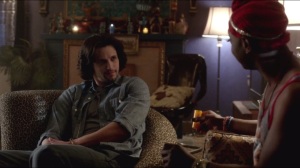 Josh: Remind me who James is again (and not just because he was recast)? Like, I know where he came from and that he and Jessica f***ed once last season, but are we supposed to believe they’re really a thing now? That’s almost as bad as Sam jumping from Luna to Nicole within days of her death. Just get James together with Lafayette already, they have real chemistry. Lafayette deserves happiness, and that frees up Jessica to get back with Jason. Everybody wins!

David: I’m the biggest Carrie Preston fan, so I’m thrilled they didn’t kill her off. Also, considering Sookie promised her kids (who grew up) she’d keep their mom alive, (why would you ever promise anyone anything Sookie you are the worst at everything?!) it’s nice to have some happiness amid the tragedy. Arlene was being feasted on by vampires when Sookie implores Eric to find a healthy vampire to save her, while Arlene shares a moment with gone-but-not-forgotten Terry that is the perfect example of sweet but not too drawn out. He tells her to live and “be happy.” I’m all for the cheese here, folks. Meanwhile, a healthy vampire Keith saves Arlene’s life – new love interest, perhaps? I hope so. And hopefully he isn’t a murderer or has PTSD. Also the fact he’s a vampire is great and shows real character growth considering Arlene’s aversion to vampires since the earlier seasons.

Josh: Ugh you’re right, that’s the only reason I can think of for giving “Keith” a name. Good luck with that one Arlene. I’m happy to see Alrene alive too, and that moment with ghost Terry was touching, but I swear to god if they bring back Terry again… We wasted half an episode last season on his funeral, just somebody stay dead already!

David: Tara’s staying put it seems like. She should have just died at the end of season four if they were going to kill her off now – I loved her way more as a vampire, but she didn’t deserve to go off with such little fanfare, even if she’ll make an appearance as a vision or ghost or something.

Josh: My favorite Tara was lesbian kickboxer Tara. She had a spine and was still a normal person. It’s so fitting that Tara died offscreen. That had the same impact as if we had actually seen it. #SuckstoSuck (literally…we’re feeling very punny today).

David: They’re all dead! FINALLY. This all happened in a healthy vampire-V-infected vampire-nameless townie fight outside Fangtasia. All our healthy vamps are alive, and so is Eric. This needed to happen – though who is the real threat now? Hoping this doesn’t become too epic and sticks with our lovely (?) Bon Temps denizens.

Josh: “True Blood” has always been in danger of devolving into soap opera territory, but that threat level is the highest it’s ever been with the main cast all in one place for once. What’s the external threat now? Eric’s disease? I’ve got nothing else. Hopefully they’ve got something else up their sleeve. This show is at its best when the blood is flowing free. Dialogue…not so much (besides Pam and Eric).

David: Everyone together in one story is great – it reminds me of the big season two Maenad dilemma/orgy/kerfuffle/whatever that tied all the threads together.

David: Remember Hoyt? Jessica’s dim-witted ex and Jason’s BFF is working on an Alaskan pipeline when Jason calls him to let him know his mom died. Sadly for all parties, Jessica glamoured Hoyt before he left so he doesn’t even remember Jason. At all. Life and death are both so complicated on this show. Nice to see an arguably fan favorite return in the final season, and something tells me this isn’t the last we’ll see of him.

Josh: Meh. Hoyt was always the nice guy, until he turned goth and just wanted to leave it all behind. But he ‘s happy in Anchorage; why take that away from him by bringing him back to Bon Temps? Hopefully that’s the last we see of good ole Hoyt. Not because we don’t like him, but because of everyone on this show, he deserves a happy ending the most.

David: LOL. Honestly all I have to say.

Josh: Alcide was my favorite. Besides the fact Joe Manginiello is from Pittsburgh (same, obviously), Alcide made the most sense for Sookie. He was sweet and loyal and arguably better looking than either Bill or Eric (though I think we know who Anna Paquin likes the most). So of course he had to die. And not only did he bite it big time, but he was put down by a bullet from some random townie. R.I.P. Alcide. And Sookie, give him at least one more episode before you screw another vampire. Pretend like you gave a crap about him. 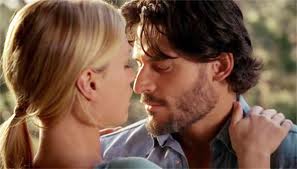 David: I never bought Sookie and Alcide for a minute, I have to say. Alcide always just seemed like such a peripheral character. Sure, they could have done more with him, but too little too late. If this had another season (thank goodness it doesn’t, honestly), he would have more to chew on (he’s a werewolf. OK, now seriously done). Also I lied before when “LOL” was all I had to say, whoops.

Josh: OK fine, I never really believed Sookie and Alcide would end up together. It’s gotta be her and William “I’m not an asshole anymore” Compton in the end, right? Though there were some definite signs of an Eric rekindling. Which brings us to…

David: As mentioned before, we get some more glimpses into Pam and Eric’s past and the early stages of Fangtasia. I love these scenes, I’ve really missed this relationship on the show the last few seasons. Eric – and begrudgingly, Pam – decide to help Sookie and the others defeat the crazy H-vamps and save the humans. Pam’s best zinger regarding Sookie: “She’s like a f***ing fungus that won’t go away.” In a strange moment, Pam also warns Bill against falling prey to Sookie’s charms (honestly, what charms at this point though? Yeah, she’s hot, but really not worth the drama). No use though, Bill already let Sookie drink his blood, with another great line. Sookie says, “It’s just lunch.” Yeah, OK. Additionally, Eric and Sookie share a long embrace this episode, where Eric recounts his travels and he comforts her after learning of Alcide’s death. #TeamEricandSookie right now, though Josh, you’re right, I think Bill’s gonna win this one in the end. Frankly, they all should really just die like Vulture said.

Josh: Vulture is so spot on. No one on this show, with the exception of maybe Jessica and Willa (I like her spunk, she’s justifying her existence) are particularly “good” people anymore. But in terms of that central relationship, the endgame has to be Bill and Sookie. Otherwise they would’ve ended the show last season with Eric bursting into flames and Alcide nailing Sookie. Now? Alcide’s dead and Sookie’s letting Bill drink her blood. And yet, despite the fact Anna Paquin and Stephen Moyer are married with a child, Sookie and Eric still have more chemistry. It’s amazing. No one smolders quite like Alexander Skaarsgard. Just ask Ginger.

David: Agreed. What are the kids saying these days? “Dat chemistry doe?” But I digress.

Josh: So what happens next week? Apparently Eric and Willa have to talk? And Sam gets a heartfelt reunion with whatshername?

David: I just see her as Jess from “Friday Night Lights” and choose to ignore her relevance to the plot. This gets confusing but it’s how I process new “True Blood” characters who are always from other shows I watch (see: Chris Meloni from “SVU”).

Josh: Yeah I just thought of Patrick (Terry’s army buddy) as Elliot’s ex-boyfriend from “Scrubs.” Frankly, I think getting killed by a smoke monster was way less embarrassing than losing a girl to Zach Braff.