The highly anticipated “The Mindy Project” is back and it did not disappoint. Five minutes into the episode, we were already laughing and quoting our favorite lines. Penis braces? What? But let’s not bury the lede here, before we go any further. CAN WE TALK ABOUT DIAMOND DAN? 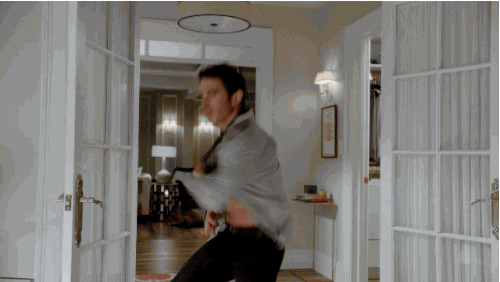 ANAMIKA: Woah, Nelly (which should definitely be a widely used catchphrase now). I see you, Diamond Dan. That was a fantastic plot twist that worked so well. It was funny, sexy and sweet all at the same time. Sometimes stripper jokes can be overdone but Mindy got it just right. I expect Fox will start selling hot pink diamond thongs first thing tomorrow. What I don’t understand though, is why Danny would keep the thong in his drawer. I thought he would be the type of person who would get rid of everything from his stripper past. I wish the episode had addressed that but it’s okay that they didn’t.

JOSH: Now that’s the Danny Castellano we know and love. Not that meathead weirdo who catfished Mindy last season. He’s back to being everyone’s favorite lovable grouch who apparently is quite talented with his mouth. I don’t know what a Staten Island handshake is, but it sounds like something every man needs to learn. It looks like Danny’s dancing skills (which he showcased last season) came from his time as Diamond Dan the medical stripper. As things that make no sense yet somehow make perfect sense go, this is an incredible reveal. The fact he kept that pink thong is beyond strange, but we can overlook that because of Dance 2.0. It looks like “More Than a Feeling” and “American Woman” are Danny’s trigger songs. Mindy’s going to have to expand her musical knowledge beyond Katy Perry for him.

DAVID: Woah, Nelly is absolutely right. It’s amazing how creative broadcast is getting in showing sexy scenes on TV without breaking any laws. I thought “The Good Wife” and “Scandal” were the only shows really capable of pushing the boundaries these days, but it’s nice to see a comedy get in on the action, literally. Here’s hoping we get more flashbacks to Danny’s stripper days – maybe it’ll unearth more secrets.

ANAMIKA: Now that Mindy and Danny are a thing, I just want Peter to find love! He really seemed ready to commit to Lauren. Side-note: I would love it if a man bought me a tiara. Also, way to obliterate the bro-code, Jeremy. I hope we don’t have to see too much of that horrendous pair in the future. And props to Peter for taking the tiara back, she didn’t deserve it!

JOSH: I was wondering why Jeremy was still on this show at the beginning of the episode. Well, at least he has something to do now. Who will Lauren choose? My money’s on Jeremy, but then again Peter’s probably grown as a character more than anyone on this show (minus Danny). Maybe Dr. D can teach him that handshake. That’ll certainly help his chances.

I would also like this time to say RIP to poor, sweet, Betsy, whose one-liners were missed just enough to remind me how funny she could be when she was given a spotlight. You’ll be missed. We’ll just have to console ourselves with Tamra’s sass and Beverly’s craziness.

DAVID: I have to say I don’t really care about a Peter vs. Jeremy fight…I sort of find all other characters irrelevant on this show minus Danny, Mindy, Morgan and Tamra. Hopefully this season mixes everyone’s arcs together well so that each character gets some growth and we’re not just focused on the show’s core couples. As much as a romantic comedy this show is, I don’t want the story lines to feel boring after a awhile of classic couple fights. I’m being extra picky because I love this show too much.

ANAMIKA: Rob McElhenney’s cameo in this episode was my favorite way of seeing a guest star on a show: subtle but funny. There’s nothing more annoying that seeing a guest star dominate a show and sideline the central characters. To top it all off, his chemistry with Ike Barinholtz was fantastic. I wouldn’t mind seeing him in a few more episodes this season. Also, I wish Morgan had punched him in the face after he found out his cousin got him into prison. It just seemed fitting.

JOSH: Honestly, I thought this was the weakest part of the episode by far. I wasn’t a huge fan of McEhlhenney’s character, though it wasn’t any of his fault. Anyone who’s willing to tat up that much for a role is clearly doing his best. I just don’t need to know that much about Morgan’s “backstory.” He’s demented yet sweet, can’t we just leave it at that? I’m more interested in the budding love triangle between him, Tamra and Rayron. That’s likely to be way more hilarious than Peter-Lauren-Jeremy.

DAVID: This felt a little gimmicky, but not as gimmicky as previous guest stars seemed (see: James Franco’s episodes). I disagree and loved to see a bit of Morgan’s backstory, even if it’s just in weird patches of episodes like this. It grounds the characters better. Side note: Here’s hoping we meet Mindy’s parents this season?

ANAMIKA: “Reporting of goings ons about people we know” – Best defense for gossip ever.

JOSH: “I can’t go, I have tickets to an execution.” – Best excuse ever.

DAVID: “If you got it, flaunt it.” – Best excuse for only owning boys size mediums. You go, Diamond Dan.