Episode two opens with Michaela, Laurel, and Connor in the woods waiting for Wes’s return. Michaela is having a level 10 freak out (justifiably), to which Connor tells her to “shut up, sit down, and stop acting like a little bitch baby.” Ouch.

Michaela asks, “What if they got caught or she convinced him to pin it on us? It’s all her fault.” But it isn’t specified which “her” Michaela is referring to before we flash back to 2 1⁄2 months earlier.

In class, Annalise explains that you never truly know who anyone is – not your clients, or your classmates, or the person you marry. Subtle, writers. Take, Marjorie Saint Vincent for example, who was stabbed with a hunting knife 16 times. Her husband Max, is the prime suspect. I took one look at him and thought he was capable of murder: he’s a pretty creepy dude.

Keating and her team attempt to convince the jury that the creepy husband is in fact not guilty. All goes well for a while: the police department is deceived, the suspect’s neighbor is blackmailed, sexual favors are exchanged for evidence. The usual.

Then (following last week’s pattern) the team is thrown a curve-ball:

Max’s daughter Eloise, the team’s key character witness, claims her father wasn’t a killer. He is just misunderstood, and damaged after losing his first wife, her mother, in a car crash. But his first wife didn’t die in a car crash! The prosecution reveals she was actually stabbed in the neck with a hunting knife, presumably by Max, after he had begun an affair with Marjorie. How will the team recover from this?

Laurel points out that Saint Vincent is a hunter, and therefore knows how to kill. The murder of Max’s first wife was done cleanly and humanely, while Marjorie’s was sloppy and violent: the two crimes were not committed by the same person. On the stand, Max demonstrates on Bonnie how to properly kill an animal, and admits that this is how he murdered his first wife. The move, while crazy, pays off, and Saint Vincent is found not guilty.

It turns out that Eloise discovered the truth about her mother’s death, so she killed her stepmother and framed her father for revenge. Annalise already knew this, because of course she did. (And because the prosecution received evidence sent from a Stanford computer.)

Aside from the case, Annalise and Sam’s marital problems are the central focus of this episode. Annalise is obviously suspicious of Sam’s relationship with Lila Stanguard (Not “Lila Sterngard,” as I wrote last week. Sorry to my devoted readers AKA my parents), and it is revealed that Sam has had an affair, presumably with a student, before. She snoops through Sam’s emails with Lila, which appear harmless except that they are signed with just an “L.”

After the trial, Annalise again checks Sam’s emails to find that all correspondence with Lila has been deleted. She runs off to her ex-detective/boy toy Nate, who, after being blackmailed to lie under oath and forced to sell out his own department, wants nothing to do with her. I can’t say I blame him. Annalise, in tears, asks/begs, him to check out Sam’s alibi for the night Lila was murdered. He was supposed to be in Yale at the time, and Annalise has nowhere else to turn.

Throughout the episode we also saw more detailed flash-forwards, shedding some light on scenes from last week. Our four apparent killers are in the woods, debating what to do with Sam’s body, when Wes suggests they flip a coin to settle the 2-vs-2 argument: heads, they get the body; tails, they leave it where it is. Wes flips the coin, and it comes up tails, but he’s like LOL NOPE.

It’s heads, let’s go get this corpse. Later, Wes is in the convenience store buying supplies. While inside, he also buys a prepaid phone and places a call. He tells the other line that they’re going to protect him/her/them.

After the trial, Wes comes home to find Rebecca being arrested as a suspect in Lila’s murder. Back in his room, Wes has some sort of revelation, and begins to search his bathroom. He finds a cellphone that Rebecca hid in his cabinet when she used his shower earlier in the episode. 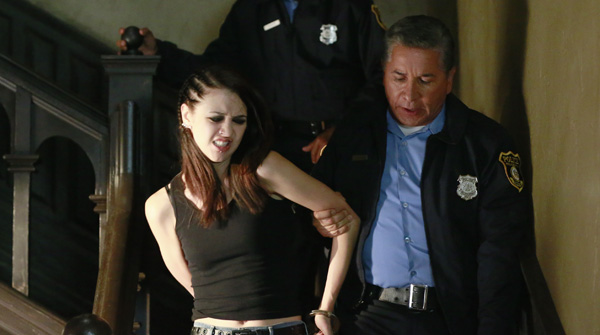 Flash forward again and Wes is biking to a hotel room, where Rebecca, not Annalise opens the door. She was the one Wes called from the convenience store. It is all her fault. The two kiss, and Wes assures her that “she’s safe now.” Doubt it.

Unfortunately, for me the most exciting part of this episode was the Gone Girl commercial that played about halfway through.

But the first two episodes pose some major questions: Was Sam really at Yale the night Lila disappeared? Is Wes really such a “puppy” after all? Literally why does Asher Millstone exist?