Well that was a biggie! “The Big Bang Theory” is a show that likes to take its time when it comes to tangible character growth, so when the milestones hit, you have to savor them. This week’s big moment was worth the wait, and the build-up leading to it was “Big Bang Theory” comedy hitting on all cylinders. 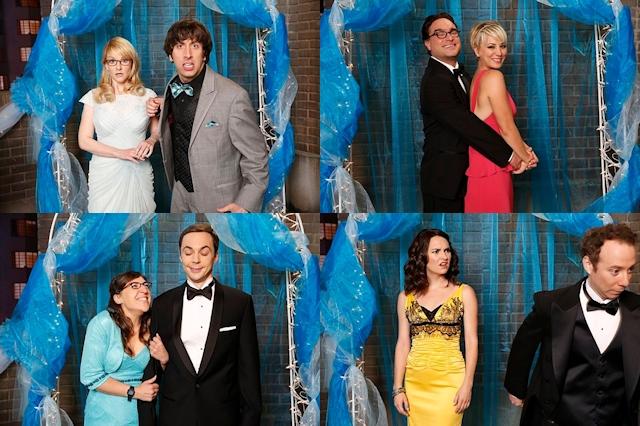 “The Prom Equivalency” kicked off with a reminder that Stuart and Debbie Wolowitz have a relationship rivaling Howard and his mother’s at this point. Howard still thinks something weird and romantic is going on between them, which wouldn’t surprise me at all. Of course, as we find out later in the episode, Stuart has his sights set on another Wolowitz.

Cut to the girls, who find Penny’s prom dress and begin reminiscing about their prom experiences. Kudos to Bernadette for the line of the episode: “I thought this would be balled up in the corner of a barn somewhere.” Jokes about Penny’s former sluttiness never get old.

Sheldon was characteristically uncomfortable with this particular ritual, so he went to Penny for advice. Penny jokingly asked Sheldon if he was going to use faux prom night as an excuse to put some starch in the upper flurmen (of course he pretends he’s an alien when he doesn’t know what else to do). Later, Leonard ribbed him about the same thing. This led to Sheldon having a panic attack at the idea of having sex, and locking himself in his room.

Amy was eventually able to talk Sheldon out of his room by promising that prom night didn’t have to end in coitous for them. Then Amy got really bold. She was getting ready to tell Sheldon something big, when Sheldon interrupted with the bombshell: “I love you too.”

Guys, I can’t stress this enough: WE HAVE TANGIBLE PROOF THAT SHELDON COOPER IS CAPABLE OF LOVE NOW. OH MY GOD.

His explanation was classic Sheldon too. He was experiencing feelings that couldn’t be explained by science, so the only possible explanation was that he’s in love with Amy. This is a huge milestone for Sheldon and his relationship with Amy, which sometimes seems pretty mean-spirited. It’s nice to see some evidence that Sheldon really cares for Amy as much as she cares for him.

On a more comically dramatic front, it turned out Stuart didn’t bring Howard’s mom to the prom, but rather his second cousin Jeanie (Kara Luiz). Remember what Howard and his second cousin did when they were 15? Short answer: Sex. The interactions there were just as awkward as you’d expect, and it all ended with Howard assaulting Stuart. And it was all really funny.

The best parts about those scenes actually came from Emily’s interactions with the group, especially Bernadette. This episode marked the return of her dark side, where she related her “Nightmare Before Christmas” tattoo to lots of bloody and disgusting things that totally fit to what we knew about her personality. Bernadette’s exasperated, “I like ‘Bibbidi-Bobbidi-Boo,’” was a perfect juxtaposition to Emily’s restrained creepiness. I like Laura Spencer and her chemistry with Raj and the group. I hope she sticks around.

Shockingly, the least amount of drama came from Penny and Leonard for once. The two shared a nice moment on the roof where you really believed they were in love. Leonard definitely had the prom he wished he had, and Penny was more than happy to oblige.

This was definitely the strongest episode of Season 8 so far. It was consistently funny and featured a landmark moment between Sheldon and Amy. #Shamy4Ever