Confession: I think after a bumpy start, “Legend of Korra” became a better overall series than “Avatar: The Last Airbender.” For the record, I think both shows are the pinnacle of animated television in terms of visuals, storytelling and character development. But there’s one thing that “Avatar” never would have dreamed to do that “Korra” went for with almost reckless abandon in its finale. Ladies and gentlemen, I give you Korrasami.

I can’t overstate enough how big this is. Yes, I wish we lived in a time when two female characters getting together on a “kid’s show” (for the record, “Korra” is far from a kid’s show) wouldn’t be such a huge development. But as it stands, that shot of Korra and Asami holding hands while staring longingly into each other’s eyes sent shockwaves across the Internet. It was such a big deal that the “Korra” creators had to confirm that Asami and Korra as a couple is now officially cannon.

Frankly, I’m no longer surprised Nickelodeon decided to pull “Korra” from its TV rotation and put it exclusively online. Yes, I’m sure it had more to do with ratings and the show’s online presence. But I also wouldn’t be shocked that the second Nickelodeon executives saw how “Korra” was going to end, they probably foresaw enough backlash that they wanted to distance themselves from the show as much as possible. Not that this justifies their logic, but check out some of the homophobic vitriol from the commenters on Entertainment Weekly’s coverage of the Korrasami story.

Ignoring what Nickelodeon deems fit for its audience, Korrasami clearly wasn’t just a publicity stunt. It was the culmination of a relationship that started with two girls fighting over a boy (I wonder how Mako feels about this…). Korra and Asami then spent the next four seasons bonding and developing into strong characters who weren’t defined by their relationships with men. There were hints all season that “Korra” might go in this direction, so it’s not like it came out of left field. For every fan that paid attention, that final shot was the ultimate validation.

Everything about that “Korra” finale (check out my recap here) felt like it validated the fans who are constantly raving about this show. From Varrick and Zhu Li deciding to do the thing forever to Korra saving Republic City from Kuvira’s rampage to Mako’s badass hero moment, it really encapsulated everything that made “Korra” TV’s best animated show.

Frankly, the bar for Western animated TV is set pretty low. I say Western TV because I’m aware of the awesome storytelling potential of anime, but I’m going to limit this discussion to American TV. “The Simpsons” and all of Seth MacFarlane’s shows are shadows of their former selves. “Archer” is hilarious, but the closest it comes to real emotion is Lana telling Archer she sperm-jacked him. Most of Nickelodeon and Cartoon Network’s current lineups appear to be geared toward college stoners (though I hear “Rick and Morty” is legit).

Once “Avatar” ended its spectacular three-season run, it left a giant flying bison-shaped hole in the animated television landscape. Enter “Korra,” which was supposed to be a miniseries but turned into an epic four-book conclusion to the universe started in “The Last Airbender.” Taking place almost a century after Aang defeated the Fire Lord and ended the 100-Year War, the action is moved to the new United Republic’s capital, Republic City, and centered around Korra, a teenage girl who happened to be the next avatar.

The show retained some “Avatar” characters, like Katara, Zuko and Toph. We learned a lot about Aang’s parenting skills through his three children with Katara. There was the occasional mention of Sokka, though we never really figured out what happened to him or Suki. Most importantly, WE NEVER LEARNED WHAT HAPPENED TO ZUKO’S MOTHER. Whatever, I’ll let that go.

But besides the occasional nods to “The Last Airbender,” “Korra” quickly established its own universe and characters. Republic City was a steampunk paradise that was was so visually different from the four elemental nations that it was automatically a novel setting. There were legitimate politics that governed the world now, much more complex than those in “The Last Airbender.”

The characters were just as vibrant, though they took a little while to grow on me. The new Team Avatar was comprised of teenagers who acted like the children of “The Last Airbender,” but they matured pretty quickly once world-shaking conflicts began bubbling to the surface. Korra was brash and combative at first, but grew into a patient and compassionate avatar. There was Mako, the standard hero; Asami, the beautiful genius; Tenzin, the wise airbending master and Aang’s son; and everyone’s favorite lavabender Bolin, the show’s comic relief and heart.

The cast steadily expanded to including the likes of Varrick, the hilariously eccentric inventor; Lin and Su Beifong, Toph’s badass metalbending daughters; Kaya and Boomi, Aang’s other children; and many more. Like “Avatar,” the world of “Korra” was populated with memorably idiosyncratic characters and inventive animals/spirits, my personal favorites being the penguin otters. 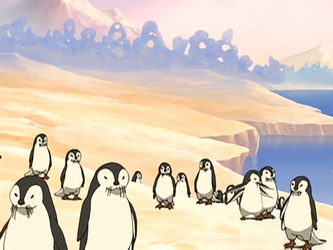 And then there were the villains. Right from the start they were scarier than Zuko and General Zhao. Amon wanted to destroy bending and almost took away Korra’s. Unaloq wanted to become a Dark Avatar and succeeded in disconnecting Korra from her past lives. Zaheer wanted to end the avatar cycle and left Korra mentally and physically beaten. And Kuvira wanted complete control over the Earth Kingdom and Republic City, and it took every good guy the series had to take her down.

Korra went through the ringer from the beginning of Book One to the end of Book Four. She, along with everyone else in her life, had to physically, mentally and spiritually grow in order to combat whatever obstacles stood in the way of peace. Along the way, we learned about the origins of the Avatar cycle, the Air Nation was rebuilt, the spirit and physical worlds were permanently merged, and Republic City was almost destroyed. And throughout it all, there was always a palpable sense of growth and forward momentum. Rarely did the proceedings stall or disappoint after the show found its footing toward the middle of Book One.

Things got dark on occasion, especially for a Nickelodeon show. There was a heavily implied murder suicide, The Earth Queen was suffocated with some terrifying airbending, and Asami’s father was swatted like a fly by Kuvira’s giant mech. Death was a real possibility on this show. Most live action shows are afraid to kill off their characters (*cough* “True Blood” *cough*), and yet I legitimately feared for the lives of these animated guys and gals.

“Korra” was also unique for animated shows in the way it approached gender and racial politics. The main character was a nonwhite female who not only could take on any man on that show and win, but also turned out to be bisexual and yet was somehow never less feminine or kickass. Heck, all the women on “Korra” could destroy the men in a fight. Vanity Fair’s Joanna Robinson articulated this much better than I just did.

So yeah, in case you were wondering, I don’t really have a bad thing to say about this show. Its characters were vibrant, the action was on point, the stories always built to a big finish, and the relationships felt real. How does that sound Korrasami?